Through a ministerial order, PPC(Teluk Ewa) has been made the Port Authority and Regulatory Authority for Teluk Ewa Port in Langkawi. The extension of the jurisdiction is made possible with the amendment to the Penang Port Commission Act, 1955 (Section 80A). On even date, the Government of Malaysia privatized the operations of Teluk Ewa Jetty. Following the privatization exercise, the powers and jurisdiction of PPC are extended to Teluk Ewa Port.

PPC (Teluk Ewa) which was set up as a Port Authority and Regulatory Authority is a separate legal entity from PPC. Nevertheless, the day-to-day management of PPC (Teluk Ewa) is managed by the management and staff of PPC. In the same respect, the Board of Directors of PPC is also appointed as its Board of Directors with the State Secretary of Kedah replacing the State Secretary of Penang. 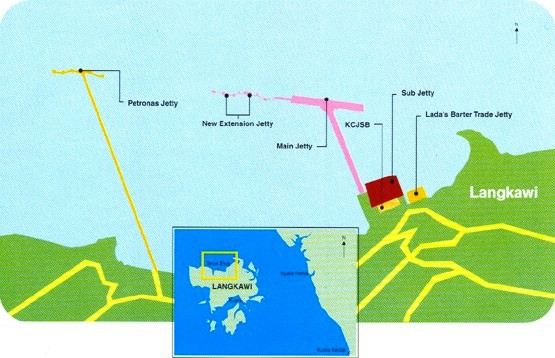 Teluk Ewa Jetty is located on a 45 acres of land at the northern coast of Pulau Langkawi. The jetty was built in November 1982 and commenced its operations in September 1984. The length of the wharf is 330 metres whilst the length of the sub-jetty is 150 metres. An additional berth with a length of 157 metres was built in 1993 to accommodate the increasing amount of cargoes handled.

Teluk Ewa Jetty is used for transporting raw materials and spare parts for the cement plant in Teluk Ewa as well as for exporting cement.

Prior to 1 January 1999, the Marine Department of Peninsular Malaysia acted as a caretaker for the management of Teluk Ewa Jetty in the absence of a Port Authority.

As a Port Authority and Regulatory Authority, the functions of PPC (Teluk Ewa) are as follows: